In 2019, onestop agreed to manage a large-scale project – the refurbishment of Sofitel Fiji. This was before the unexpected outbreak of Covid-19. The project started in October 2019 and was due to be completed in September 2020. A large portion of the project took place during the height of the pandemic, because of this, the onestop team had to overcome and navigate through various disruptions and challenges to ensure a smooth running of the project.

In January 2020, the team met in onestop’s in-house factory in China for the inspection of mock-ups. A few weeks later, Covid-19 began to spread globally which prohibited travel between countries due to health risks. Thus, most of the quality checks had to be done virtually and special ICs had to be appointed to conduct quality checks on behalf of the onestop team. Although they faced turmoil, the onestop team demonstrated expertise and professionalism in project management by completing the project within the given timeline. An Australian-based interior design studio, CHADA, was also brought into the team to bring their designs to life. 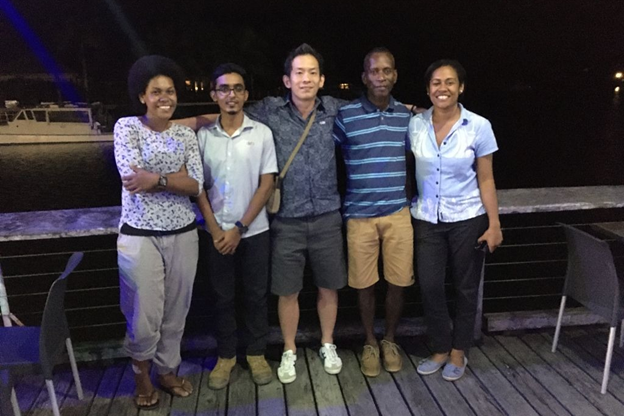 Aaron (middle) with his Fijian counterparts

Aaron, onestop’s project manager, held the fort and remained in Fiji for the entire project to oversee furniture installations across the resort due to travel restrictions. While the onestop team was initially engaged to only work on the restaurant, they were later tasked with remaining public areas and guest rooms after their client witnessed the high quality work that was delivered.

One area that required greater management was the Market Kitchen, which is the main daily buffet area of the resort. The downtime of the area had to be minimised which provided limited time for construction. This resulted in multiple trades being lined up tightly amongst each other, both in the working schedule and the physical space of the site itself, as they were working concurrently and vying to proceed with their respective works on the same area. This caused some disputes between trades, however, they were quickly resolved through replanning by the managers and some on-the-ground mediation.

Another area that required extensive quality control was the feature screen – a full height screen with organic curves. The individual pieces that make up the screen were machine engineered and finished in the onestop factory in China. However, due to the uncertainty of the site conditions and the 3-dimensionally curved nature of the decorative rope feature, the ropes running diagonally through the screen and their respective angled openings had to be done on site to ensure they would be accurately fitted. While the feature screen was particularly time consuming during the installation phase, the time and determination put in by Aaron and his team allowed them to deliver the finished product with a high standard of quality.

During the design phase of this project, the onestop team also collaborated with designers and resort management on material and finishing selections, as well as provided solutions for detailing work. As the building was 12 years old, the old building plans provided to work from were not as reliable as expected, hence leading to several issues due to incorrect dimensions during the installation phase. However, after working closely with the project management team, onestop was able to resolve these issues by either rectifying the components on site or refabricating new components and then using airfreight to meet the scheduled deadline. Overall, because of the efficient and professional on-site team of carpenters and the backend support from onestop’s factory in China, these challenges were resolved and the tight deadlines were met.

Through this Sofitel project, Aaron demonstrated his ability to adapt to different projects and site management styles according to what the situation at hand required. He also aided in bridging the language barrier between the team of Chinese-speaking carpenters and the local sub-contractors in Fiji to minimise any miscommunication.

Throughout the refurbishment of Sofitel Fiji, onestop played a key role in several areas of the resort. One such area is the Bazaar Restaurant, of which onestop was in charge of the wall panelling, buffet counters, furniture, column cladding, and light shades that made with synthetic wicker. The onestop team also managed the coordination for the installation phase of the area. Additionally, workers from onestop’s factory in China who helped in manufacturing flew over to Fiji to oversee the installation process. The team was able to demonstrate their skilful and efficient work ethic to bring together a unified look for the Bazaar Restaurant in Sofitel Fiji.

Other than the Bazaar Restaurant, the onestop team was also engaged to work on the main lobby of the resort. Within this large area, they were tasked to complete the interior fit-outs, massive lamps, panelling, dividers, furniture, and structure of the space. The large woven lamps in the lobby were manufactured by the team in Indonesia, Bali, and spanned an impressive 2-3 metres in diameter. Initially, the team also wanted to use solid wood material for the wall panelling. However, after more planning, they switched to use vinyl instead as solid wood would have been too heavy to be mounted on the walls. 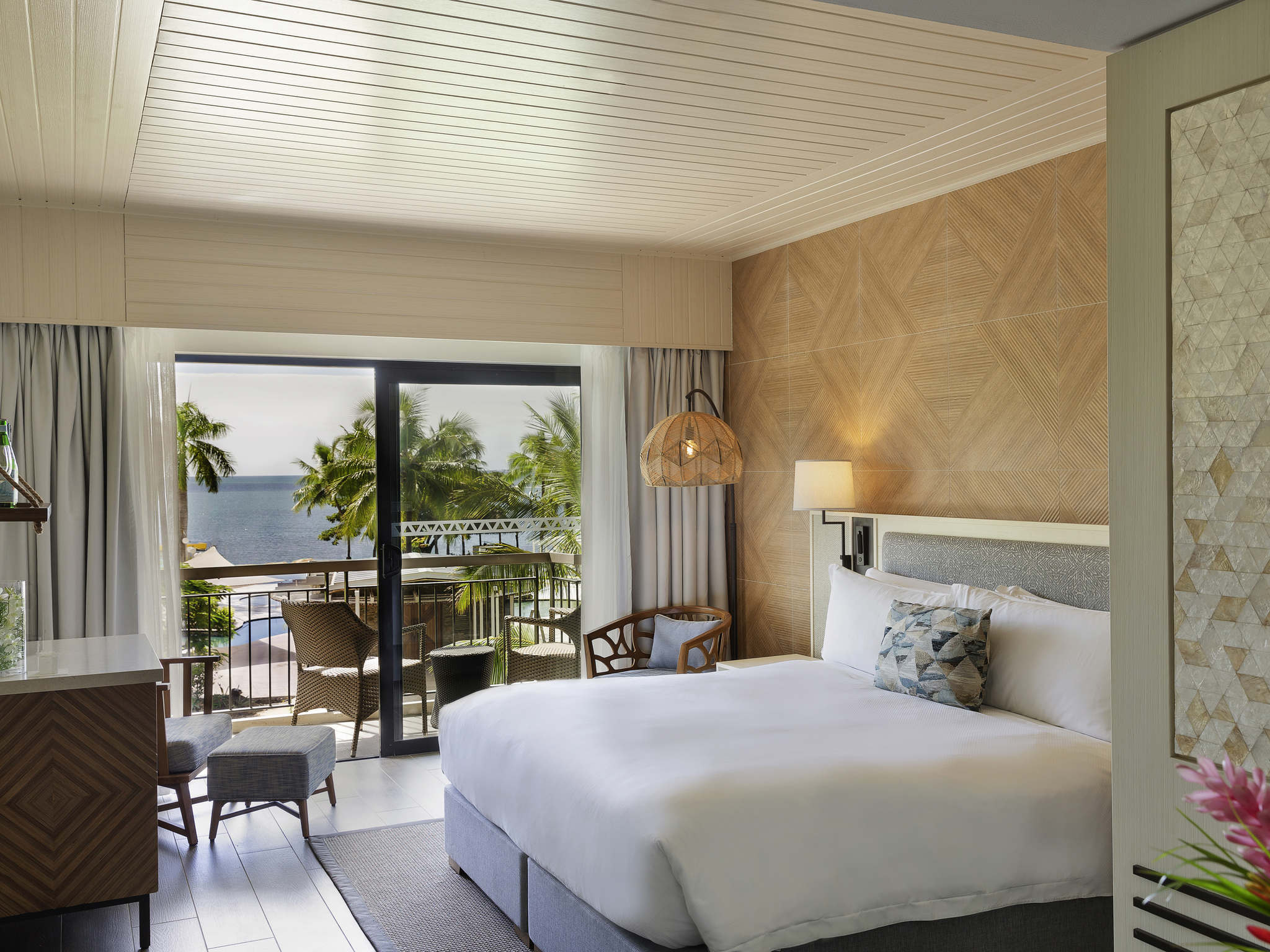 Another area of the resort where onestop played a significant part were the hotel rooms. Although the team was not part of the installation process, they supplied all the furniture within the rooms. These included the lounge chair and coffee table set, ottoman, bed headboards, lights, custom-made rugs, vanity counter, toilets, and wardrobe – which incorporated a mother of pearl feature wall. The lounge chair and coffee table set required liaising with the interior designer to provide options for the fabric based on cost and availability. This fabric was also to match with the ottoman. In addition, the onestop team provided coconut husk tables for the suites. These tables were entirely handmade and had been meticulously pieced on one-by-one by the onestop Indonesian team. onestop once again demonstrated their expertise and close attention to detail to deliver quality products for the hotel rooms of the resort within the same tight timeline.

Overall, this large-scale project surrounding Sofitel Fiji was brought to success through the management and collaboration of various teams and workers. Such include the logistics team – which had played a substantial part in ensuring that goods were shipped out on time – and our local partner, CMG, who had been instrumental in the effective clearance of goods as well. Aaron’s elaborate project management had also played a key role in ensuring quality control and the smooth running of the project throughout the entire duration whilst navigating through a global pandemic.

The onestop team’s determination to uphold a high standard of quality while maintaining an efficient work ethic allowed them to complete the project successfully and to meet deadlines within the short timeframe. If you are looking to involve a professional opinion for your furnishing needs, reach out to us here for a free consultation today!

How to Select and Care for Metal Furniture

Checking in: How hotels maintain calmness through design

Post Pandemic Influences In Your Space: Positive or Negative?